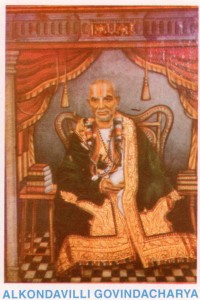 Sri Alkondavilli Govindacharya Swamy was the second son of Sri Srinivasa Iyengar who hailed from Tirupraithurai in Tiruchirapalli district in Tamil Nadu State, India. A. Govindacharya’s father, Sri Srinivasa Iyengar was a tutor in English to Sri. Nalmadi Krishna Raja Wodeyar, Maharaja of Mysore and was known as “Angrezi Srinivasa Iyengar”. Sri Govindacharya Swamy traces his ancestry to Sri Ramanuja’s disciple Vaduga Nambi or Andhra Purna at Saligrama. He stood first in Engineering in the year 1878 for which he was awarded the medal from the School of Engineering and Natural Science, Bengaluru. He was an Executive Engineer in the PWD, Government of Mysore. The Nanjangad Kapila Bridge was built under his supervision. The house which he built in the then Viceroy Road in Mysore was called “VEDAGRIHAM”, his wife’s name being Vedanayakamma.

Sri Govindacharya Swamy put into practice the teachings of Sri Ramanujacharya in initiating “Harijans” [so-called outcasts/untouchables] into the Srivaishnava fold by “anointing” them in the traditional way and taking them inside the temples along with him (Yalandur temple in T.Narsipur Taluk).

Sri Govindacharya Swamy authored a number of books in English so people from other countries can understand our tradition. Dr. Annie Besant of the Theosophical Society was in constant touch with Sri Govindacharya Swamy but he fell out with her on ideological grounds. Sri Govindacharya Swamy and Prof. Max Mueller, the famous Indologist of Germany were in mutual contact through exchange of letters. One Parsi friend, Mr. Saklatwala of Mumbai and Sri Govindacharya Swamy had discussions on Zorastrianism and Srivaishnavam. When I visited VEDAGRIHAM on 15 November 1997, Swamy’s great-grandson Dr. Muthu narrated to me an event purported to have taken place during the life time of Sri Govindacharya Swamy. When Swamy’s manuscript of “The Life of Ramanuja” was kept near his “Thiruvaradhana Perumal” (Koil Azhvar), a cobra was seen on the manuscript raising his hood, thereby acknowledging the work, which was taken as a blessing of Sri Ramanujacharya, as Sri Ramanujacharya is himself an incarnation of “Adisesha”. His successor was his grandson (his only daughter’s eldest son) Dr. Yamunacharya (father of Dr. Muthu) who was a Professor of Sanskrit in the University of Mysore. Dr. Yamunacharya authored a book “Ramanuja’s teachings in his own words” published by Bharatiya Vidya Bhavan, Mumbai.

In addition to the above books (and many that currently don’t seem to be available), Sri Govindacharya Swamy also contributed the following articles in early 1900s to the Journal of Royal Asiatic Society of Great Britain and Ireland published by Cambridge University Press:

In addition Sri Govindacharya Swamy contributed many articles to the Theosophist.

Also the below articles were published in The Light of Truth (Siddhanta Deepika) and Agamic Review: 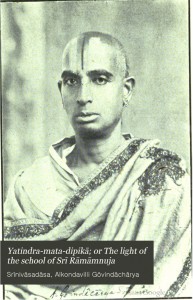