I worship azhagiya maNavALa mAmunigaL who is the target of thirumalai AzhwAr’s mercy, who is an ocean of auspicious qualities such as knowledge, devotion, etc. and who is greatly attached to yathIndhra (srI rAmAnuja).

I surrender unto the lotus feet of srI rAmAnuja (emperumAnAr) who is very attached to the golden lotus feet of srIman nArAyaNan and who thus considers everything else as a piece of grass (insignificant), who is my AchArya and who is an ocean of mercy and all other most auspicious qualities.

I worship yAmunAchAryar by whose mercy my defects have been removed and I have become an identifiable object, i.e., previously I was like asath (matter) and now I have realized that I am sath (soul) after meditating on the lotus feet of yAmunAchAryar.

I bow down at the lotus feet of nammAzhwAr whose lotus feet are always the mother, father, children, wealth and everything else and who is the leader of our srIvaishNava community and such lotus feet are decorated with maghizha flowers and always radiantly glowing.

I reach out to srI ranganAthan who is a beautiful ornament decorating srI mahAlakshmi’s breasts, who is a great radiance himself, who is resting in srI rangam and who is like a crown jewel on the lap of Adhi sEshan. 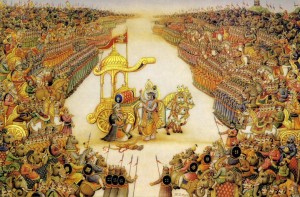 bhagavath gIthA is the world renowned vaidhika (vEdhic) scripture which was spoken by srIman nArAyaNan himself. srIman nArAyaNan himself descended as krishNa and explained the real essence of vEdhAntham in gIthA. In the battlefield of kurukshEthra, when arjuna became perplexed on thinking about fighting his own kith and kin, krishNa assumed the position of an AchArya (spiritual preceptor), explained the truth to arjuna and convinced him to fight the adharma (unrighteousness). It is because of this gesture of him, krishNa is famously known as gIthAchArya.

The following well-known slOkam explains the glories of gIthA:

All the upanishaths are cows. The cow-herd boy who milks the cows is krishNa. arjuna is the calf.  The wise are the ones who drink the (sweet) milk. The sweet gIthA is the milk.

The most celebrated charama slOkam – gIthA 18.66 “sarvadharmAn parithyajya mAm Ekam saraNam vraja | aham thvA sarvapApEbhyO mOkshayishAmi mA sucha: ||” carries the most important message of srIvaishNava sath sampradhAyam – that is, bhagavAn is the only means to attain him (and kainkaryam at his lotus feet is the goal to be attained).

In dhivya prabandham, AzhwArs glorify gIthA and gIthAchArya in many pAsurams: 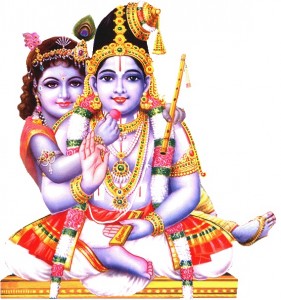 It is that same gIthAchAryan, who is lying down in srIrangam as srIranganAthan.

thirukkOshtiyUr nambi, one of the main sishyas of ALavandhAr, explained the essence of gIthA charama slOkam to srI rAmAnuja. In course of this incident, srI rAmAnuja revealed the meanings of the charama slOkam to those who desired for the same and was thus anointed with the title “emperumAnAr” (my great master) by thirukkOshtiyUr nambi himself – mAmunigaL explains this incident in piLLai lOkAchAryar‘s mumukshuppadi – charama slOka prakaraNam (section) avathArikai (introduction).

emperumAnAr subsequently wrote gIthA bhAshyam – an elaborate commentary for bhagavath gIthA. emperumAnAr explained gIthA in its purest form, keeping the dhivya prabandham and AzhwArs‘ divine emotions in his mind. This is very easily understandable from the commentaries given by him for many of the slOkams.

In srIvachana bhUshaNa dhivya sAsthram, piLLai lOkAchAryar explains in the beginning itself that mahAbhAratham reveals the principle of bhagavAn being the only means to attain him. mAmunigaL explains the full essence of gIthA in the vyAkyAnam for the 6th sUthram of this divine grantham to explain emperumAn’s act of assuming the role of AchArya.

In AchArya hrudhayam, azhagiya maNavALap perumAL nAyanAr (the younger brother of piLLai lOkAchAryar), beautifully compares bhagavath gIthA and thiruvAimozhi in a set of chUrNikais (aphorisms). He establishes that gIthA became famous due to the fact that nammAzhwAr (and other great saints) acknowledged the importance of it (highlighting that the scriptures are glorified due to the acknowledgement/acceptance of learned saints/sages). Presentation on “bhagavath gIthA – thiruvAimozhi comparison”  can be viewed at

ALkoNdavilli gOvindAchArya swamy have blessed many works in English for the benefit of mankind in the late 19th and early 20th centuries. One of his works is the English translation of srI bhagavath gIthA, originally published in the year 1898, now available on this site as the “Original” Edition, with a couple of changes for modern context and language. We have also now started working on preparing a “contemporary/simple edition” of this book (available on this site as the “Simple” Edition) with the following changes so the general populace at the present time can easily understand the text:

To write the word-by-word meanings for the gIthA slOkams, we will be using the thamizh translation of the same by puththUr krishNamAchArya (krishNaswAmy iyengAr).

Seeking the blessings of srIman nArAyaNan, AzhwArs and AchAryas, we begin this effort for the pleasure of kaNNan emperumAn and his devotees.